Home/Research/Interaction of a co-rotating vortex pair
Previous Next

The vortical system shed by aircrafts, especially big ones, is a hot issue since it’s affecting the capacity, the safety and the environmental impact of the air transport system. The interaction of co-rotating vortices generated by aircraft wings is characterized by turbulence that influences the lifetime of the wake. The vortex pairing process, in most of the cases, leads to the formation of a single, stable and significantly larger vortex. In this context the interaction of co–rotating vortices has become a field of intensive research during the last decades.

The interaction of a co-rotating vortex pair has been studied experimentally at LAT/UP. The flow field under study is the result of interaction of the pair of co-rotating tip vortices formed by a split wing configuration, consisting of two NACA0030 wings arranged at equal opposite angles. The wing arrangement is placed in a low turbulence subsonic wind tunnel (Rec=133000). Measurements were accomplished on cross plane grids at several locations from the trailing edges of the wings, using in-house manufactured X-wire, 4-wire and 12-wire Hot Wire Anemometry probes. The latter made possible the estimation of spatial velocity derivatives and the vorticity field. 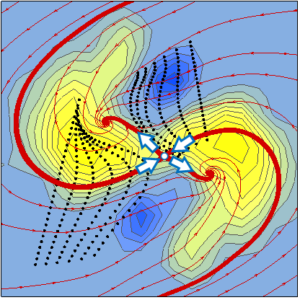 Vorticity contour plot in the formation region of a co-rotating vortex pair, with 12-w HWA. Thick lines indicate converging and diverging separatrices. Equi-time spaced markers indicate the velocity distribution. In the near wake formation region, the flow field is dictated by the pressure distribution established by the flow around the wings, mobilizing large masses of air and leading to the roll up of fluid sheets. Fluid streams penetrating between the wings collide, creating on the cross plane flow a stagnation point and an “impermeable” line, i.e. a diverging separatrix of the co-rotating vortex topology joining the two vortex centres. Along this line fluid is directed towards the two vortices, expanding their cores and increasing their separation distance. This feeding process generates a dipole of opposite sign streamwise mean vorticity within each vortex. The rotational flow within the vortices obligates an adverse streamwise pressure gradient leading to a significant streamwise velocity deficit characterizing the vortices. The turbulent flow field is the result of temporal changes in the intensity of the vortex formation and changes in the position of the cores (wandering).

The results on successive cross planes indicate that after shedding and formation the two vortices are swept along the streamwise direction, spiralling around each other, developing a braid of two vortices and deforming the external flow field. Gradually the interaction flow field links both vortices together until the final merging and the formation of a new stable linear vortex. Each variable is affected in a different way providing complementary information on the development of the flow field.

About the Author: lat